My beef with Henry Coe

How my return to "Conquer Coe" was met with violent resistance 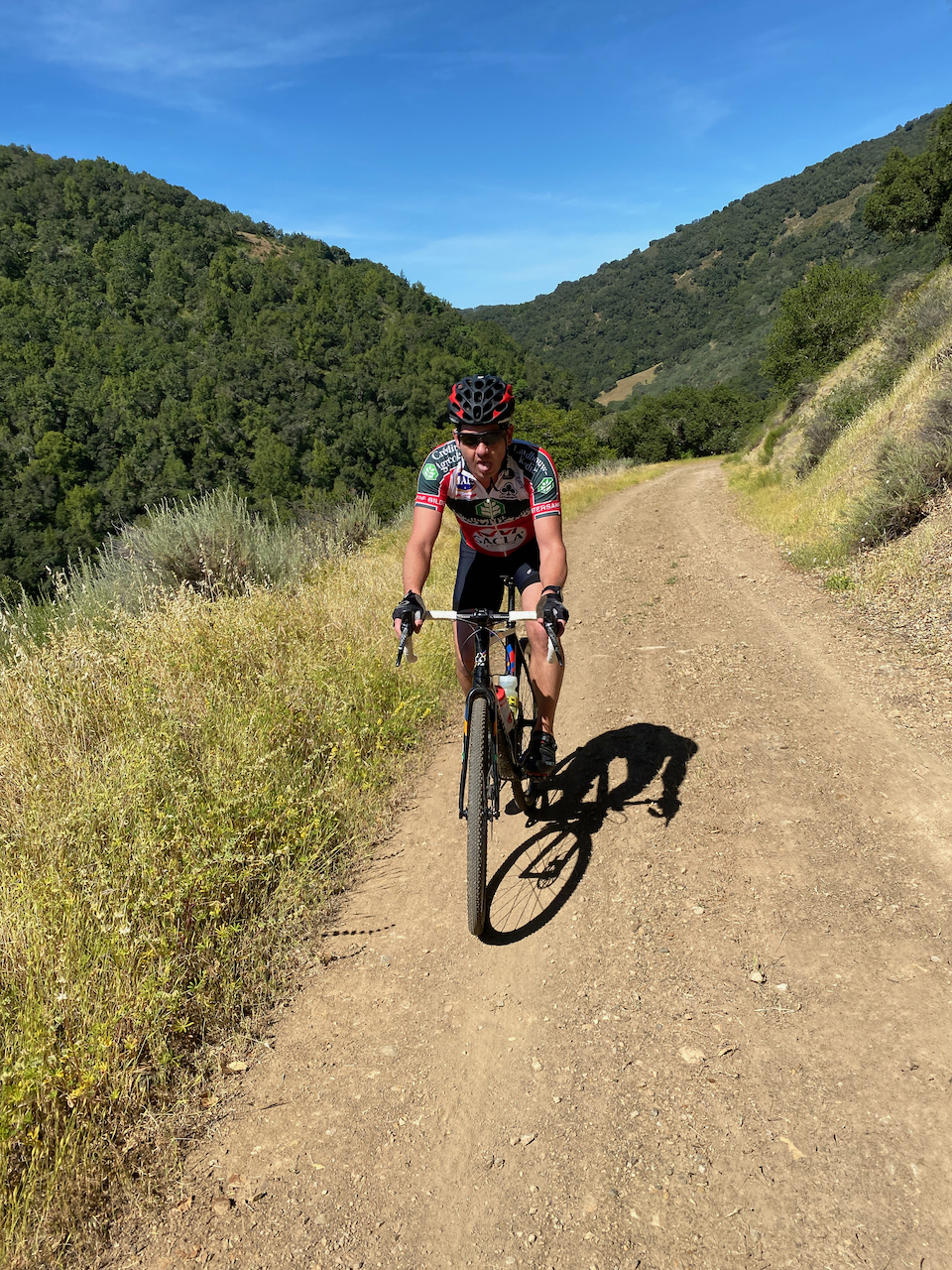 For background, I haven’t been here in decades, and when I last was with my late friend Joe, and the ride was a bit of a disaster. I remember being chased by wild turkeys and doing a lot of walking up hills, where it was hotter than shit and it felt like the most formidable place on earth. I don’t remember what month it was but probably the wrong one, like August or September.

Fast forward to 2020, I had plans to return to the Coe because I’m in better shape and I’m sure my memory about this place was wrong. I know it gets hot so it had to happen before June. 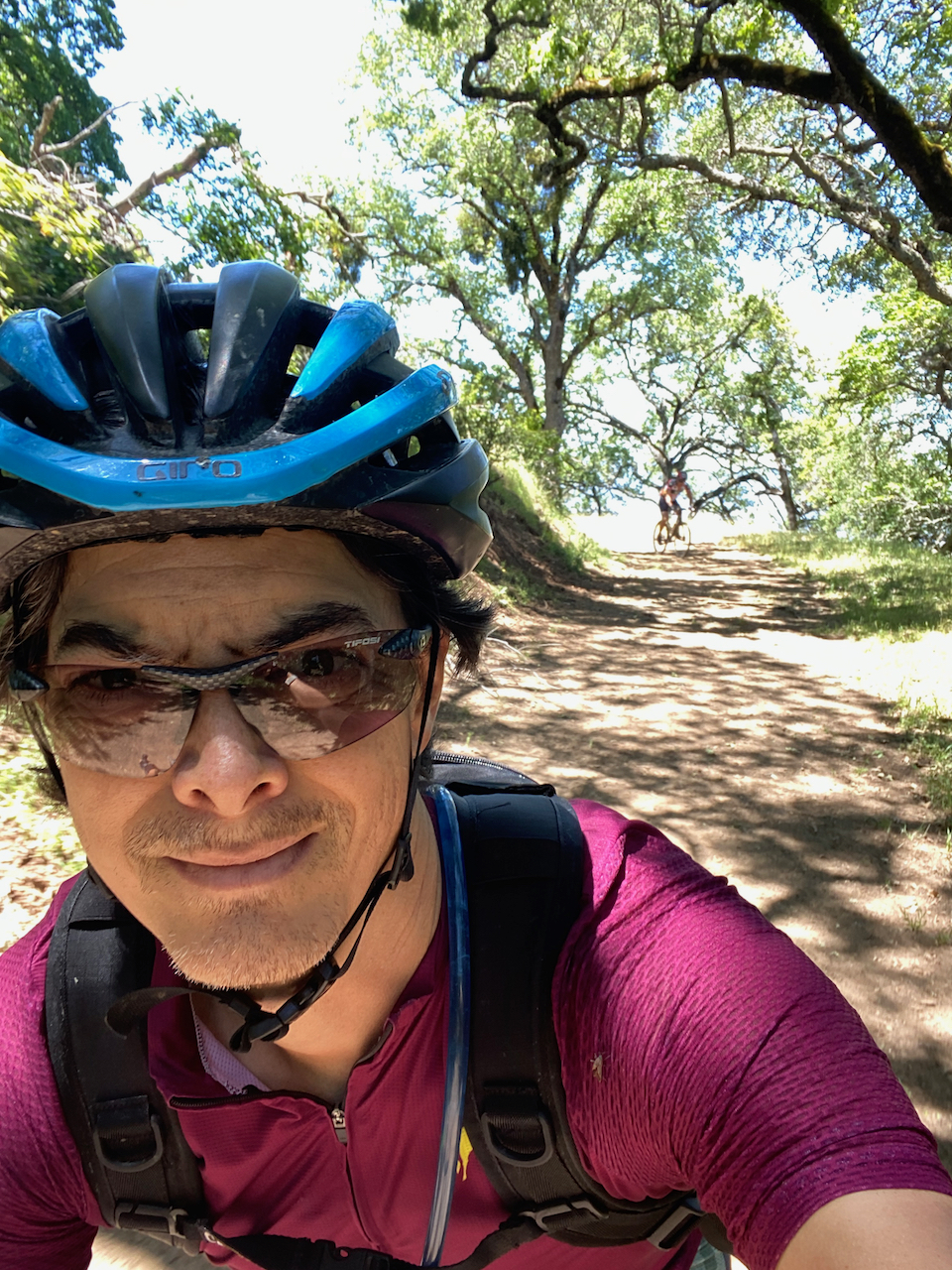 As for routes, the park is huge and you can get out all the way to the I5 if you want. I wanted to do something challenging so 30-40 miles felt about right. Plus, I remember that the riding was almost all fire roads, so the cyclocross bike should be perfect. With that, I planned a route.

Strava wasn’t around when I used to come out here, and my old paper maps with notes about the trails were long gone. I didn’t know exactly where I had ridden before but using Strava’s route planner, I was able to use the Strava route planner to put together a good looking 36 mile ride with 5500 ft elevation. We picked Memorial Day weekend as the time to go because, eh, it was free and usually the weather is good then.

We left the parking lot at Coyote Lake and headed up Gilroy Hot Springs road until the dirt began. Two miles in and things started going sour–there was a gate in front of the trail that said No Trespassing. We could see the dirt road snaking up the hill in the distance–I saw an “Open Space Preserve” logo at the bottom and we decided that it was OK to jump the gate. Probably just some stupid Covid-19 closure. Up the hill we went. 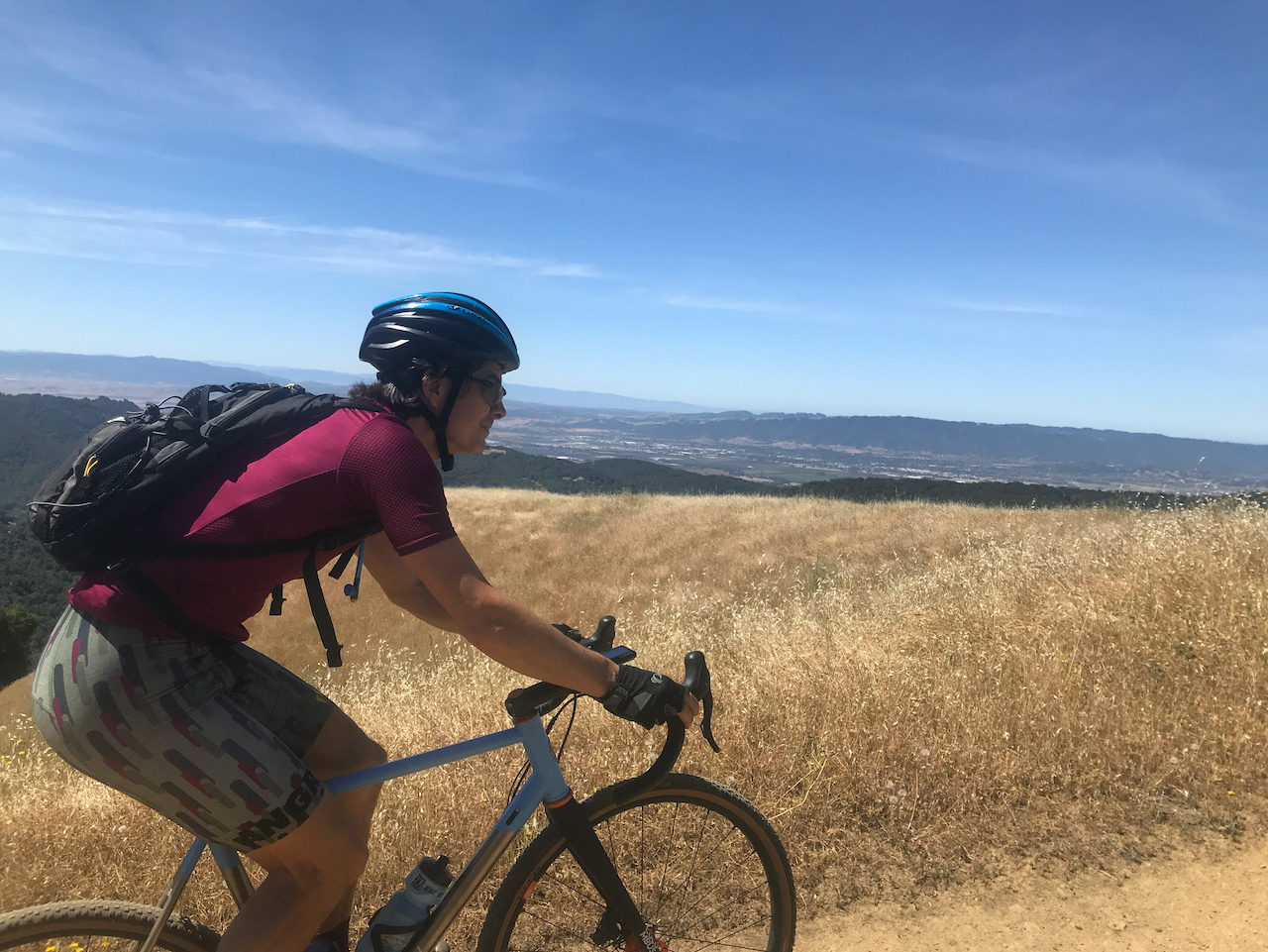 About 1/3 way up the hill, there was another gate. This one was a lot more clear: “Private Property No Trespassing” it said, and this was clearly into someone’s property other than the state park. What the fuck was Strava sending us on roads through private property? This stuff is pretty easy to find on a map–how could it not have said so? Well crap, we were already into our 2200’ climb and upon looking at a satellite image from my phone, it was clear that we would shortly be in the park after crossing a couple miles of dirt road. I was pissed off that Strava sent us this way but determined to go on. Once in the park, we’d be golden. 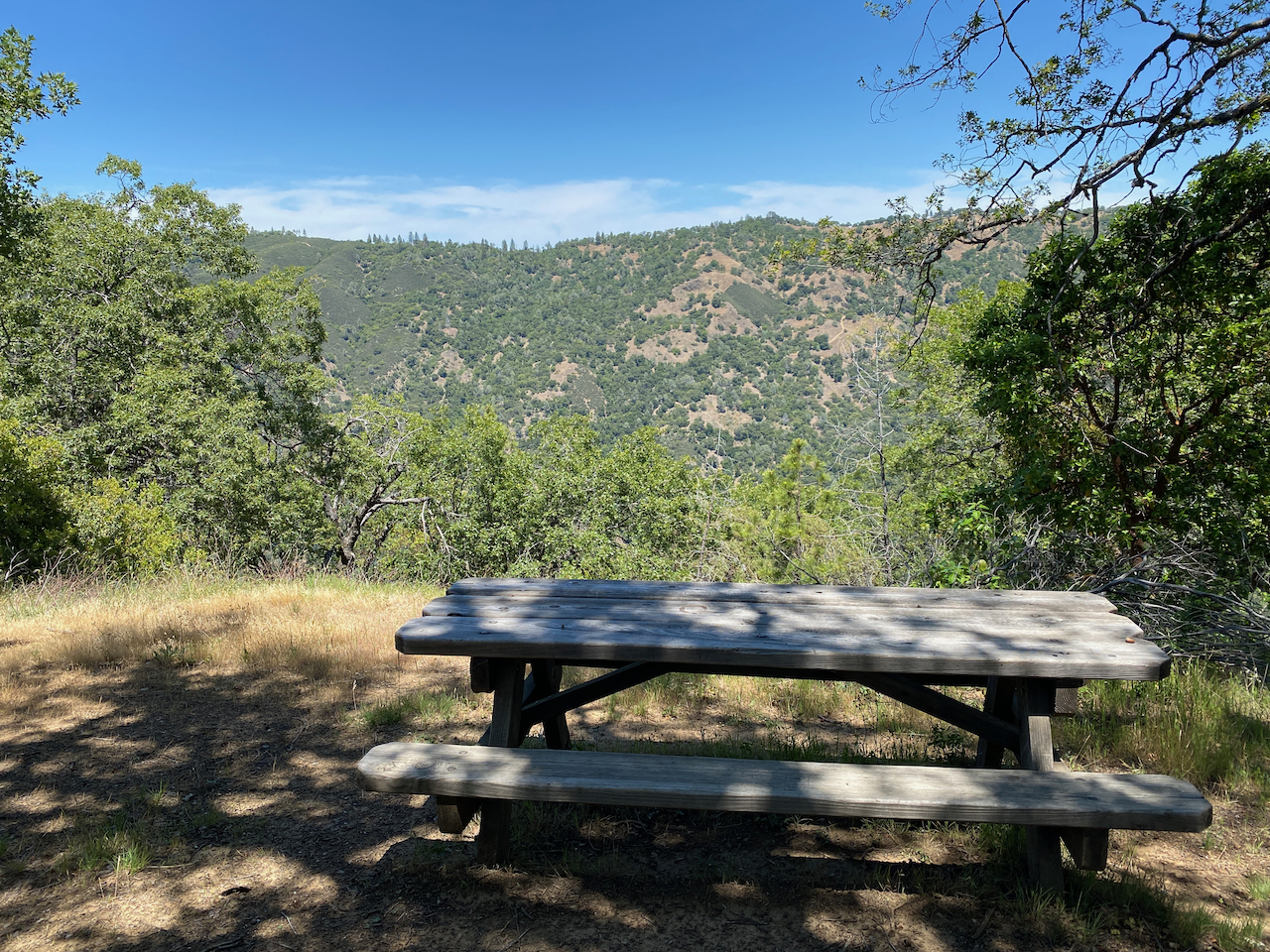 Sure enough, we got to the park land and gave each other a high-five. No more worries for the rest of the ride as we strolled through the park land across the ridge. We ran across some ranchers and waved hello at them–the started shouting at us about having crossed private property to get to where we were and luckily Kevin didn’t tell them to fuck off this time. We apologized and they said “no problem, not get out of here”. I think we high-fived again because we now had been forgiven for our sins of crossing the property in some sick way, and since they didn’t shoot at us, we were fine to keep going.

The trail quickly turned to crap. You couldn’t tell which way to go, except for the hoof holes from cows walking through while muddy. It was almost un-rideable now, with the trail dropping down from the ridge in a bone-jarring, rattly crapfest. It was no fun, and all the work from climbing was not being rewarded at all. The map said we were still on the trail, which, for god’s sake, was hardly a trail. Maybe it was 30 years ago but clearly no biker had been on this thing ever. 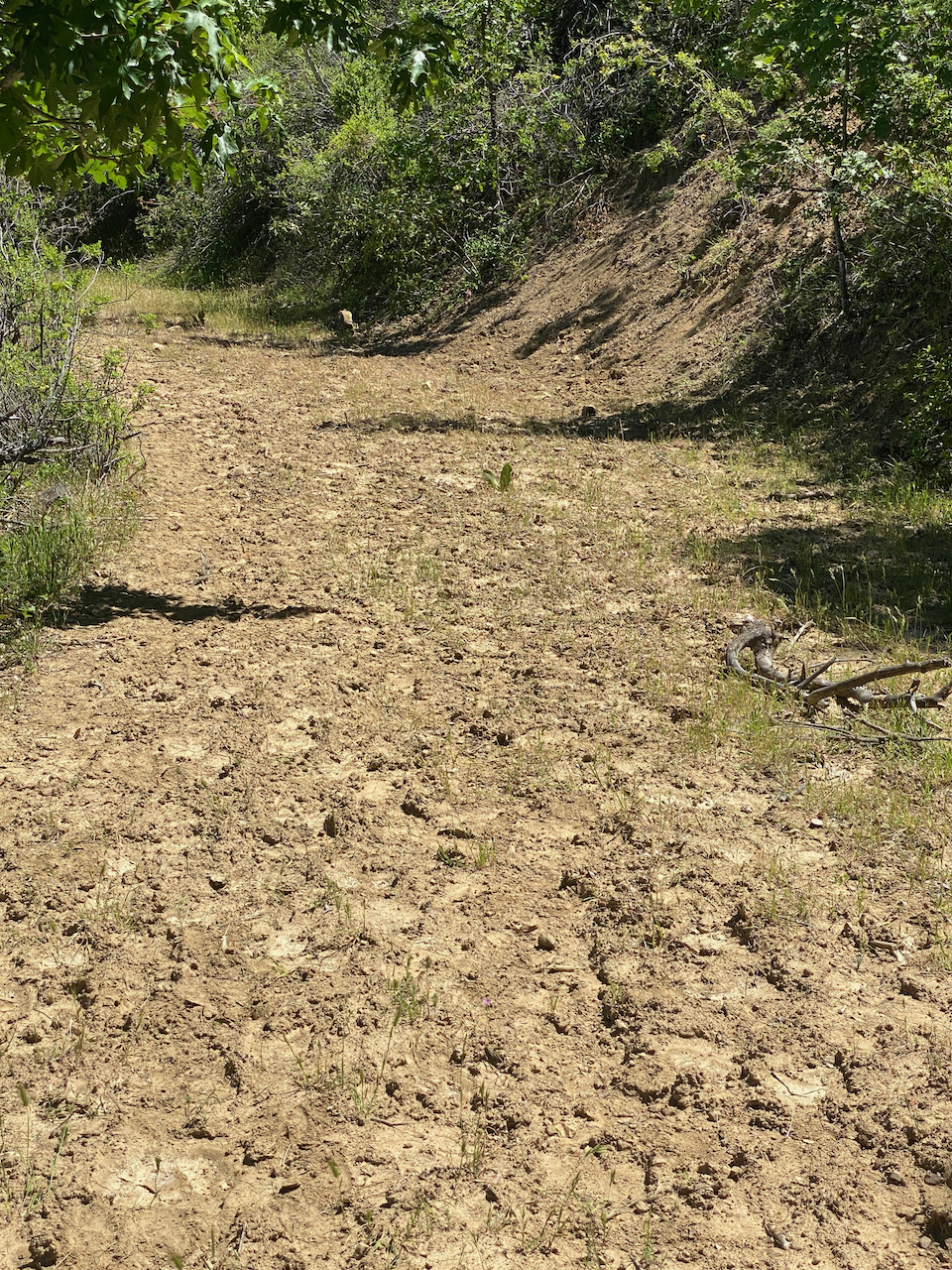 The trail shrunk down into a small path where it looked like some cows walked through single-file a few years ago. It was crossing meadows, going over logs, and in general not very fun. We were still “on the route” per Strava, but at this point, we were definitely not riding anymore. It was worrisome and flat-out dangerous, with branches and pine cones all over the washed out trail. We probably average 5 miles per hour for the next 5 miles, or an hour of misery for those who are math-inclined. I could see that we were almost to the “road”, which I remember being a “real” road when I was doing the planning.

About 1/4 mile before the “road” we hit another private property gate. On the other side was the remnants of some road covered with poison oak and fallen trees. We crashed our way through it, ended up at some cell tower. Getting to the road was easy from there, after hopping another gate. 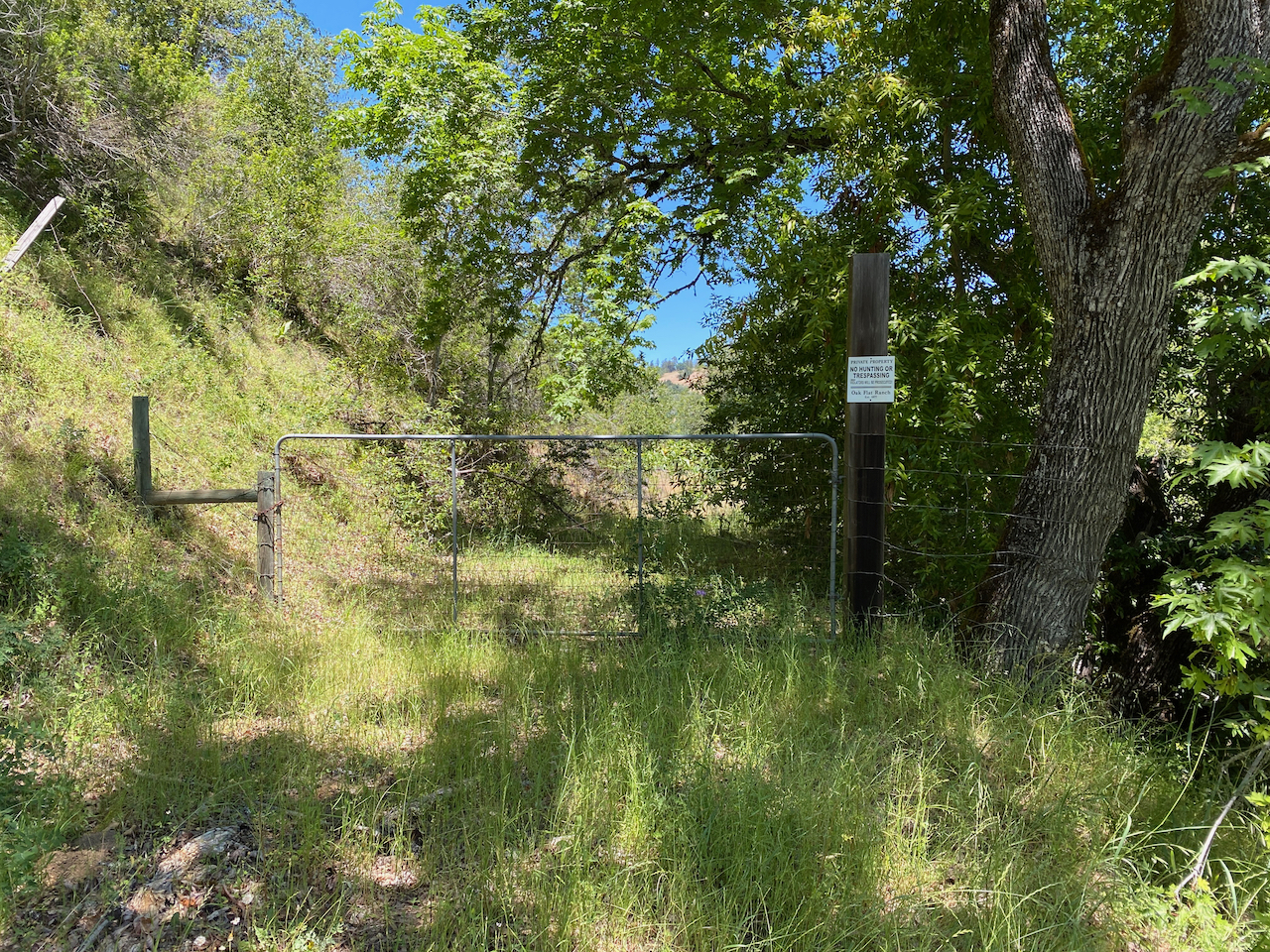 Now we were back actually riding up to the Henry Coe headquarters where we posed for some selfies and joked about how crappy the Strava route planner is. Seriously what a piece of crap. We rode on and ended up on some dirt road that headed away from HQ. It was crazy steep, probably 25% grade, and totally unridable. After a bit of cruising along the top, we ended up at a nice picnic table with a view of Mt. Sizer. 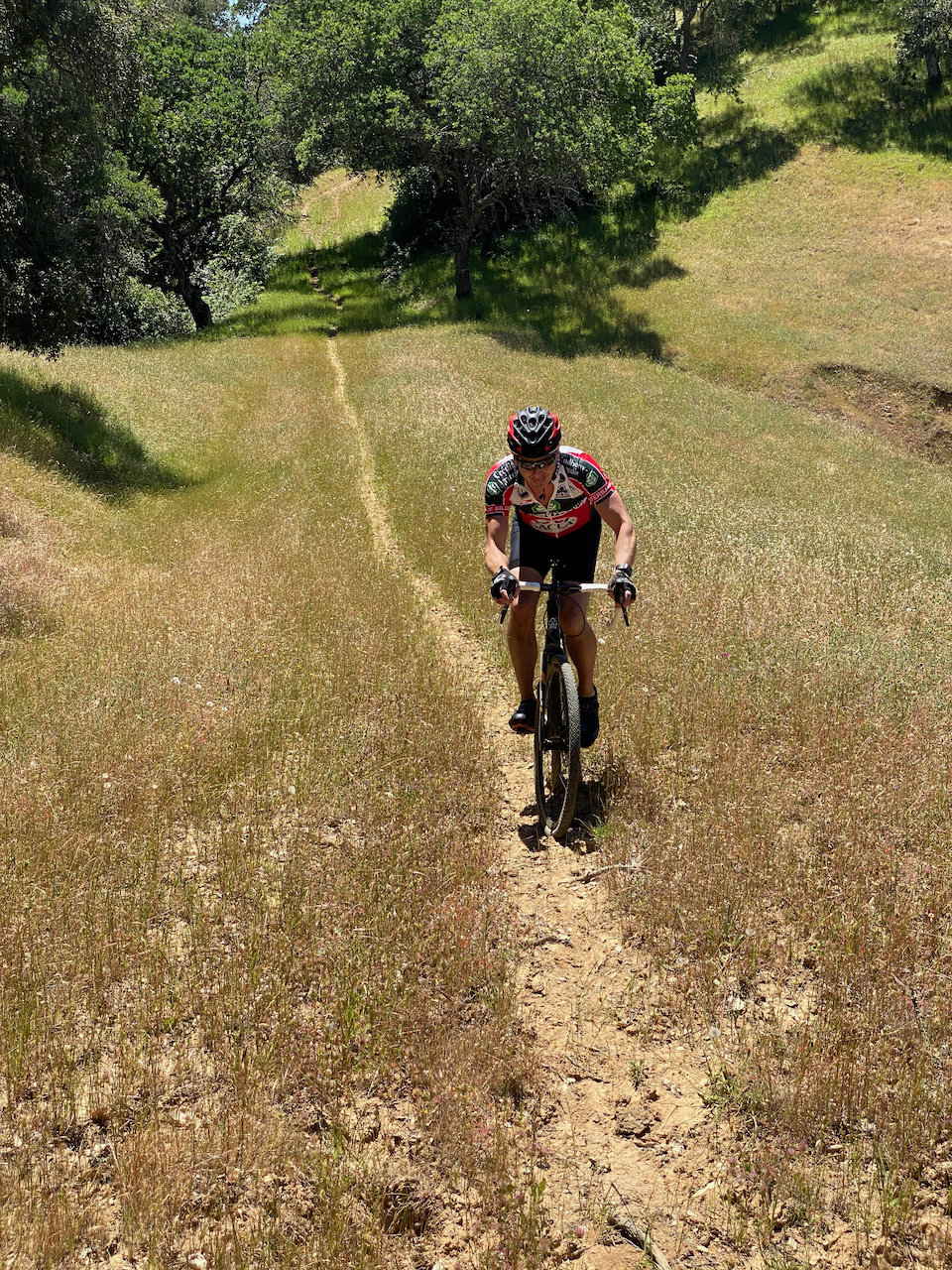 The route told us to head down some really narrow and over-grown looking trail. I knew we were back in the park now, so we went along and started riding what’s called “Middle Ridge” which was kinda fun, except for the ticks and poison oak. After rolling along the top of the ridge, the trail made a steep descent down towards Kelly Creek at Los Cruzeros Camp. There was one really tight, off-camber section with some tree roots that I put my foot down while riding over. I thought “I should really tell Kevin to walk this section” (he’s a bit hard-headed about walking) but kept going. I stopped at a switchback when all I heard was this awful moaning.

Kevin likes to joke around and make dramatic noises while riding but this was different. More of a “uhhhaaaaaaa, uhahaaaahahaaa” sound that went on long enough that I knew I had to go help out. There he was, laying across the trail with his bike all tangled up. He was holding his left arm and grimacing in pain. 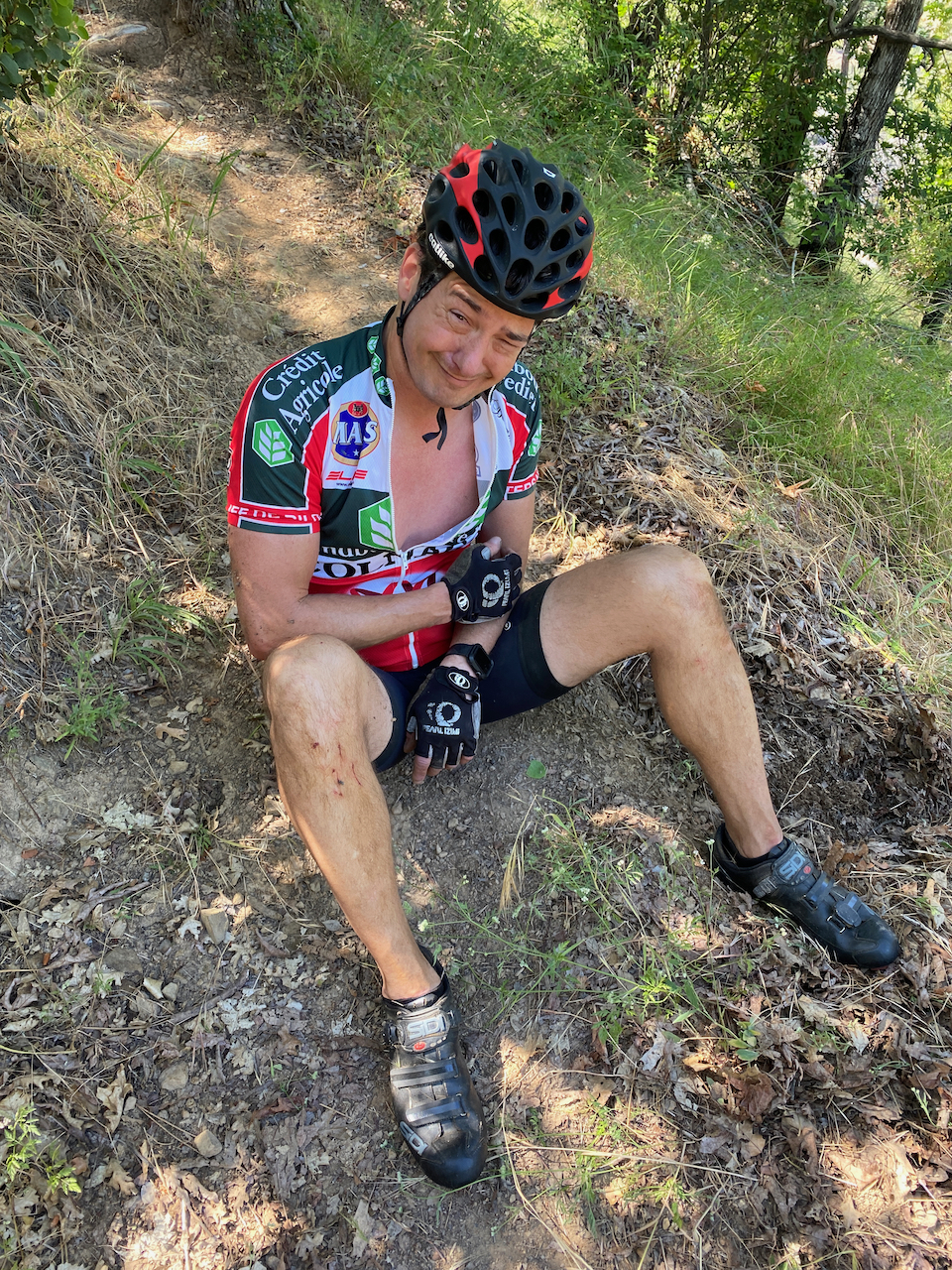 A bit of background on Kevin and injuries. He tends to get hurt on his birthday–there were three years in a row where he burst his appendix, got kidney stones, and something else really bad. We’ve had his birthday party in the past without him, and with him approaching his birthday (you know how old people keeping track of things) his body may have been just ready for an accident, so here it was. He was hurt and I was trying to figure out how bad.

Anyway he says “my ribs” and “I heard a loud snap”. I have him move his arms and legs and after about 15 minutes he was able to sit up. He was definitely not riding out of here, and we were just about 1/2 way through our loop. That means 17 miles left, and thanks to the Covid-19 nonsense, the ranger station is closed. There’s no cell signal, no way to get a car in here even if someone was working. If I took off to get some help, it’d take hours before I could even get to a road, thanks to the Henry Coe hell-hole roads. If he punctured a lung, he’d die out here, and if I stayed there with him, it wouldn’t be great for me either.

Kevin is all fucked up, but eventually he can stand. He can walk, but not very fast (I mean, really not very fast) and down the trail we go, with my hauling the two bikes through the poison oak. We end up at Kelly creek where it looks like there’s a proper road. He tries to stretch out the back & ribs while I gathered some mugwort to wash off the poison oak (thanks Chris King for that great trip). We leave there after about an hour, and it’s flat enough that he can ride. Sort of. 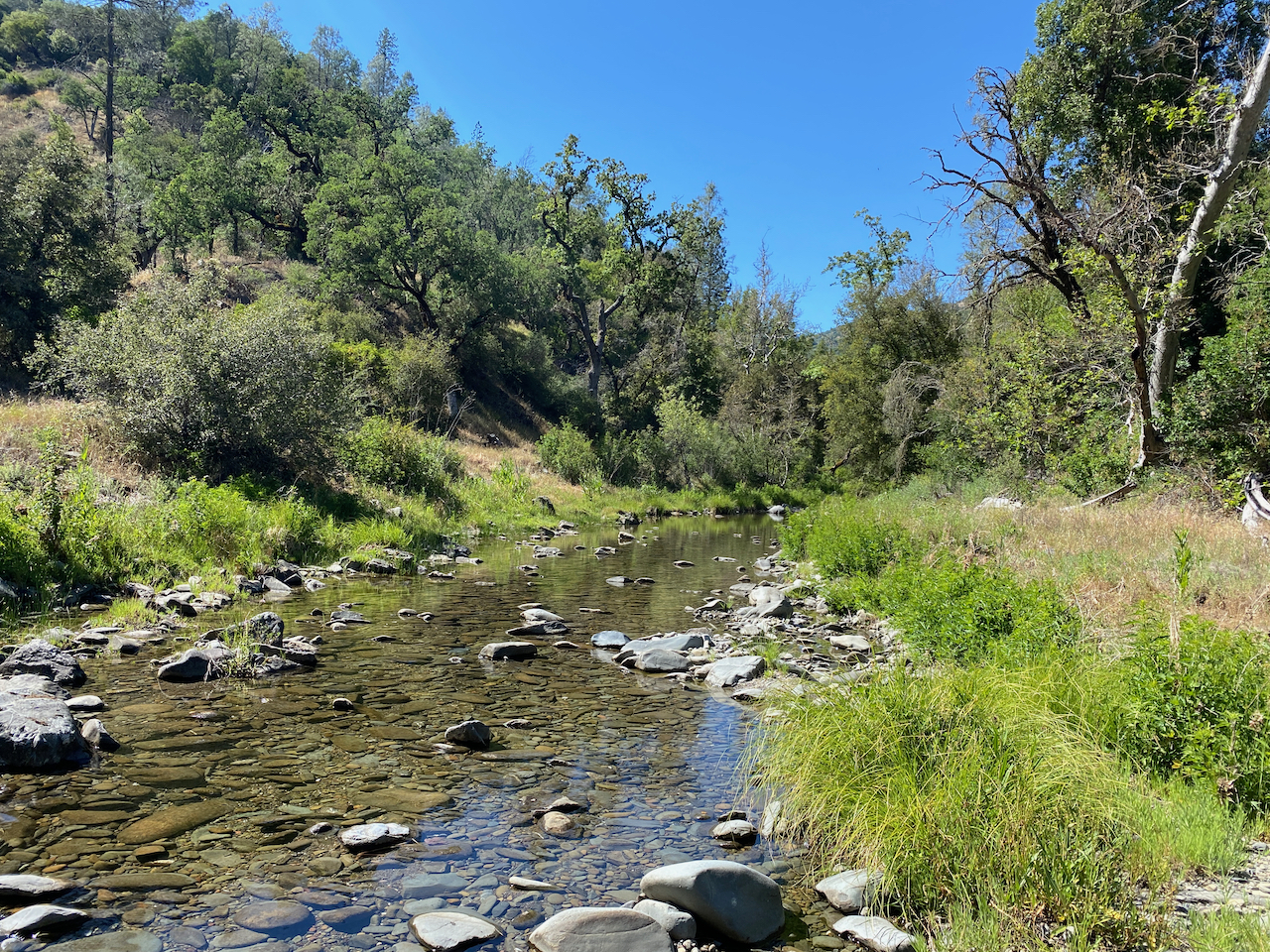 The trail crosses the creek and turns to a dirt road, which is awesome because now we can go a bit faster. That is, until you hit the hills. See, Henry Coe’s dirt roads were clearly made by some angry tractor driver who was in some sort of competition to see who could make the most fucked up roads. I mean, they’re really steep, and even if you don’t have broken ribs, most of the real climbs (the ones that are on Strava all seem to end in “Wall”) are really not ridable. How steep? 20%? 30%? There was one that was really barely walkable. It doesn’t really matter, because Kevin did have a bad injury and could barely walk, let alone ride up one of these walls. I was pushing both bikes which wasn’t super easy either. 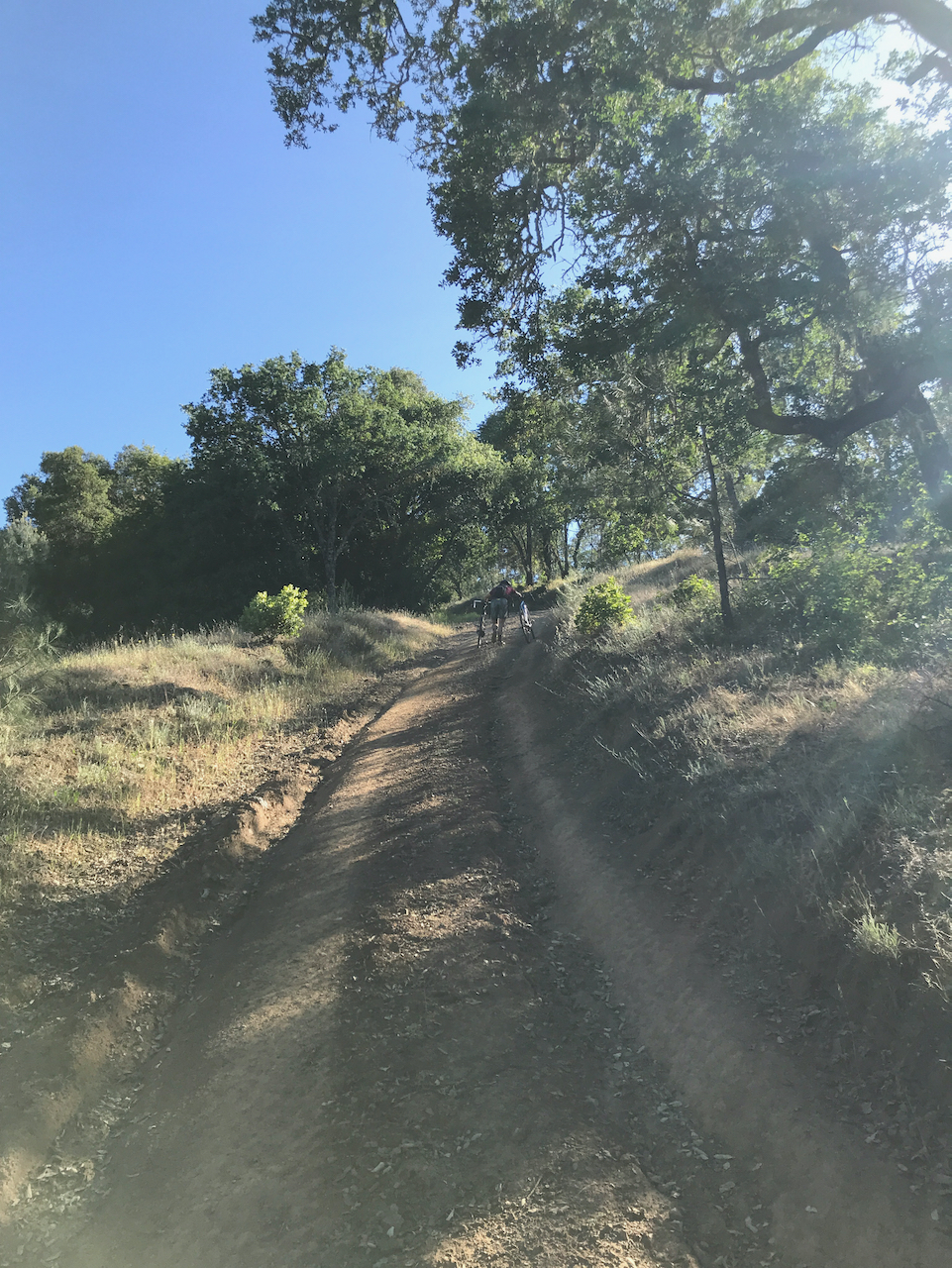 We did this for about 8 miles. As you’d guess, the downhills were harrowing and flat-out stressful to watch Kevin ride down, making his “uhahhhaaaa” sounds the whole way down. There were stream crossings, too, one of which I shot across in a full tuck only to figure out that it was about 2’ deep, causing me to do a fantastic high-speed endo straight into the water. I realized that the cross bike floats, and I ended up covered in green algae. 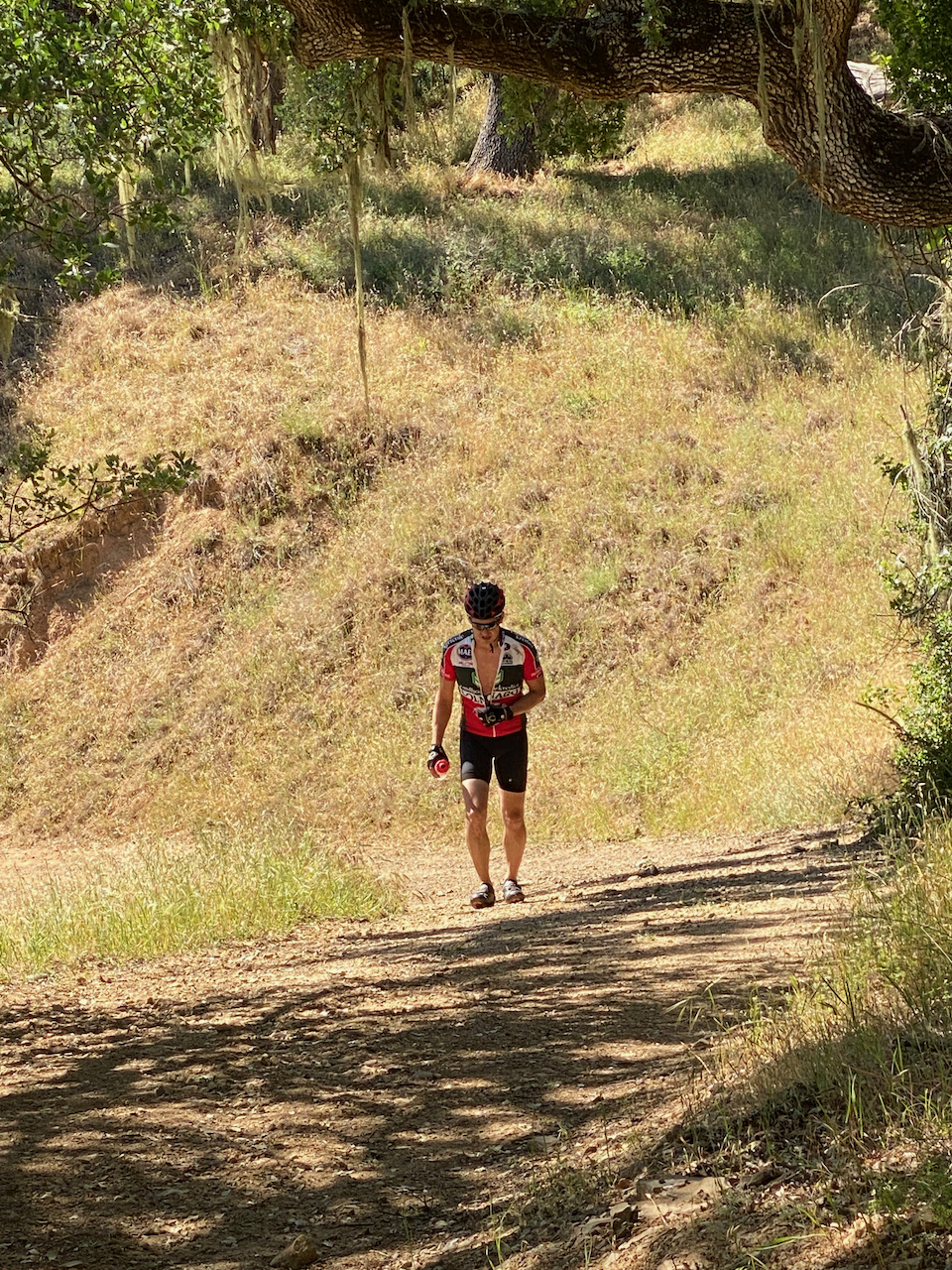 Finally we got down to the road, which went along the creek until it hit Coyote Lake by where we parked. There were so many bugs in the air that you could get a full meal by just opening your mouth while riding down the road. What a great way to end the day.

9 hours later, we were back in the car driving to get a taco at Tacos Ameca in Gilroy. Kevin wasn’t so great–he could only eat one of his tacos. But we did agree on a couple things.