Are California Trains good for Travel?

I decided to take a train instead of drive for 5+ hours...

We hear that us Americans love cars, or so they say. If you’ve ever driven in the bay area, you may feel otherwise, thanks to the nearly non-stop congestion. It makes travel unpredictable, stressful, and uses up a lot of valuable time.

There is definitely something to be said for the freedom of the car. You can gas up almost anywhere, stop anywhere you want, and enjoy some quality time with your family. Almost no planning is necessary!

But if you need to go further than an hour or so, it’s not so simple. Driving from the Bay Area to Southern California, for example, is 300 miles and between 4-6 hours of “quality time”. You will eventually run out of music that you want to listen to, podcasts all end up sounding the same, and it’s likely that if you’re traveling with others, you’ll end up being the only one awake, so the “quality time” is pretty boring.

So I decided to take the train. You can take the Amtrak from San Jose down to Santa Barbara and although it’s longer than a drive (8 hours), you can relax, work on the computer, sleep, etc. Seems like a much better use of time, plus the scenery is pretty cool.

But what’s the catch? Why don’t people do this all the time? I know many people who venture down south but one of them take the train, ever. In fact, I got a whole lot of eye-rolls, when I said I was going to try it.

I decided to give it a shot—a completely car-free trip to Santa Barbara, with a bicycle.

First off, getting tickets was easy. I bought them the day before the trip, paid an extra $20 each way to bring my bicycle along, and picked a business class ticket for the trip back, so I could see the difference between that and coach.

Side note—I tried this trip before, unsuccessfully, because the 2018 mudslides in Montecito covered the tracks with debris.

Getting to the train wasn’t straight forward. I took the Caltrain from the Palo Alto University station for $11.50, and in 28 minutes I was at the San Jose Dirdon station. I planned an extra hour to figure out how to get to the Amtrak and find where to deposit my bike. Along the way I received a text message from Amtrak saying that the train—scheduled to arrive at 10:10—was now arriving at 1:20PM! Three hours late. But since I was already in San Jose, heading home wasn’t going to be worth the hassle, so I sat in the train station for a few hours and did some work.

During that time I received a few more text messages and the time pushed out another hour. I had plenty to do, but this was pretty irritating, mainly because now I was going to arrive in Santa Barbara pretty late and still had some things to do when I got there (such as, eat a good dinner). Plus I was running out of battery, and thanks “power poachers”, all the outlets in the San Jose train station were covered off.

I rode to Santa Clara and eventually found a Peet’s coffee, where they were nice enough to let me bring my bike inside while I had coffee and charged. Eventually it was time to head back, so I rolled back into the station.

After being directed to different tracks a few times (I think there are 9 platforms in San Jose), we got on an extremely long train and I handed off my bike. We were off and now I could relax.

Once rolling I checked the schedule. It showed that we would make up time along the way, and would get to Santa Barbara at around 8:00, which was fine. It was a strange process once we were rolling—every now-and-then we would slow down to a crawl and follow some crazy twisty path through a valley, up a hill, along the beach, etc. And if you look carefully on Google Maps, there is just one track along the way! So we had to stop a couple times for many minutes while coordinating a pass of a train going the other way. That time we were going to make up was slowly going away, and now the estimate to arrive in Santa Barbara was getting later and later. 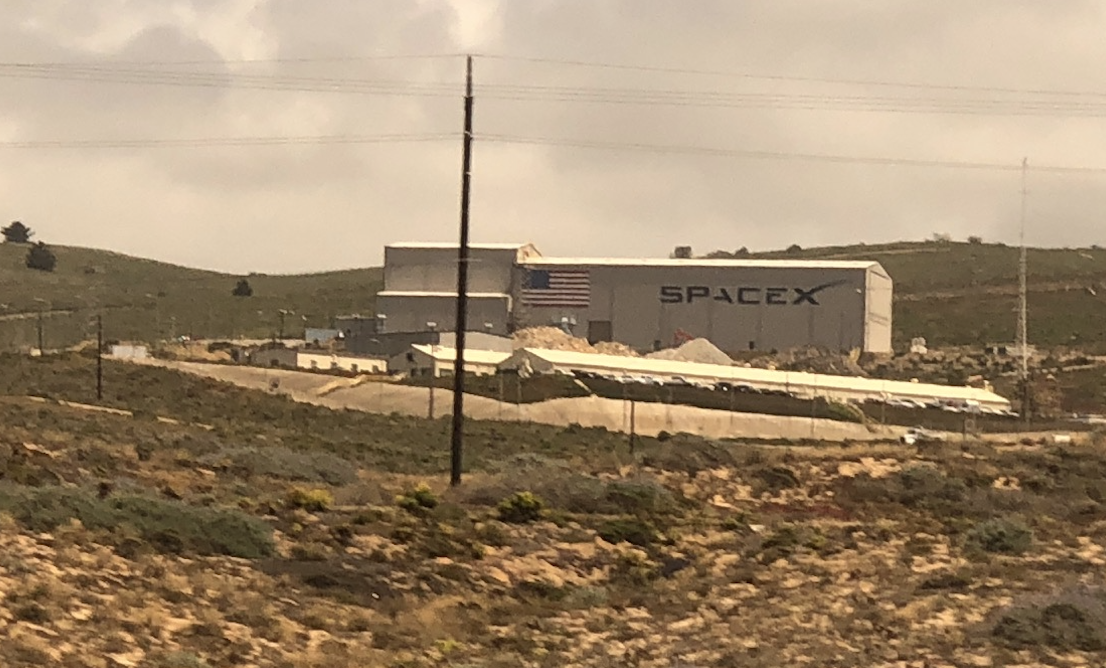 The SpaceX California launch platform viewed from the Amtrak

I was starting to understand why the trains aren’t used that often—they’re just not very efficient for passenger travel. Why, you may ask?

That said, the cost is low ($189 round trip, see breakdown at end) and once you’re on, it’s pretty delightful. Plenty of room, power for the laptop, a slightly overpriced snack bar where you can buy beer and M&M’s, and nothing much to worry about once you’re going.

It’s a shame that the infrastructure isn’t there for a great experience, because it’s much safer and more efficient in general. I have some thoughts on what it would take:

I really liked that I could do other things than stare at the road and curse at slow drivers in the fast lane. No speeding tickets or accidents, no wear-and-tear on the car is a bonus too. But there’s a lot to do before this is a viable option for most people.

All-in, I’d grade this trip with a C. The folks I talked to on the train also said the reliability stinks, and that it’d be hard to plan a family vacation or business meeting with an Amtrak in the middle of it.

I think there is a chicken and egg problem with train travel in California. I’m sure Amtrak loses money on every trip like mine and cannot justify pumping more into the system. But without some investment, the antiquated system is just going to die a slow and painful death. By making it a bit faster and a lot more reliable, there would be good reason to take it instead of fly or drive, and perhaps the resulting revenue dollars could justify the sunk costs.

We don’t need a crazy high-speed rail in 30 years from now that goes through Bakersfield. We can take the existing system and give it a modernization and have a darn good solution pretty quickly. Transportation solutions should be “mass-transit first” and automobiles a distant second. Wider roads to fit more cars may sound good but the underlying issues with driving are never going to match the efficiency of a good train system.